In The Small Crucifixion from the National Gallery, the artist invites the viewer into the horror of crucifixion, with moving realism and immediacy. The perfect and divine oblation of our Lord on the Cross radiates from the canvas. Christ’s abandonment, desolation, and poverty on the Cross is expressed through every element in the scene – form, line, color, and composition. The viewer is drawn to His emaciated body racked with marks of torture, his bloodied face, and his bowed head, all of which speak of his unbearable agony. 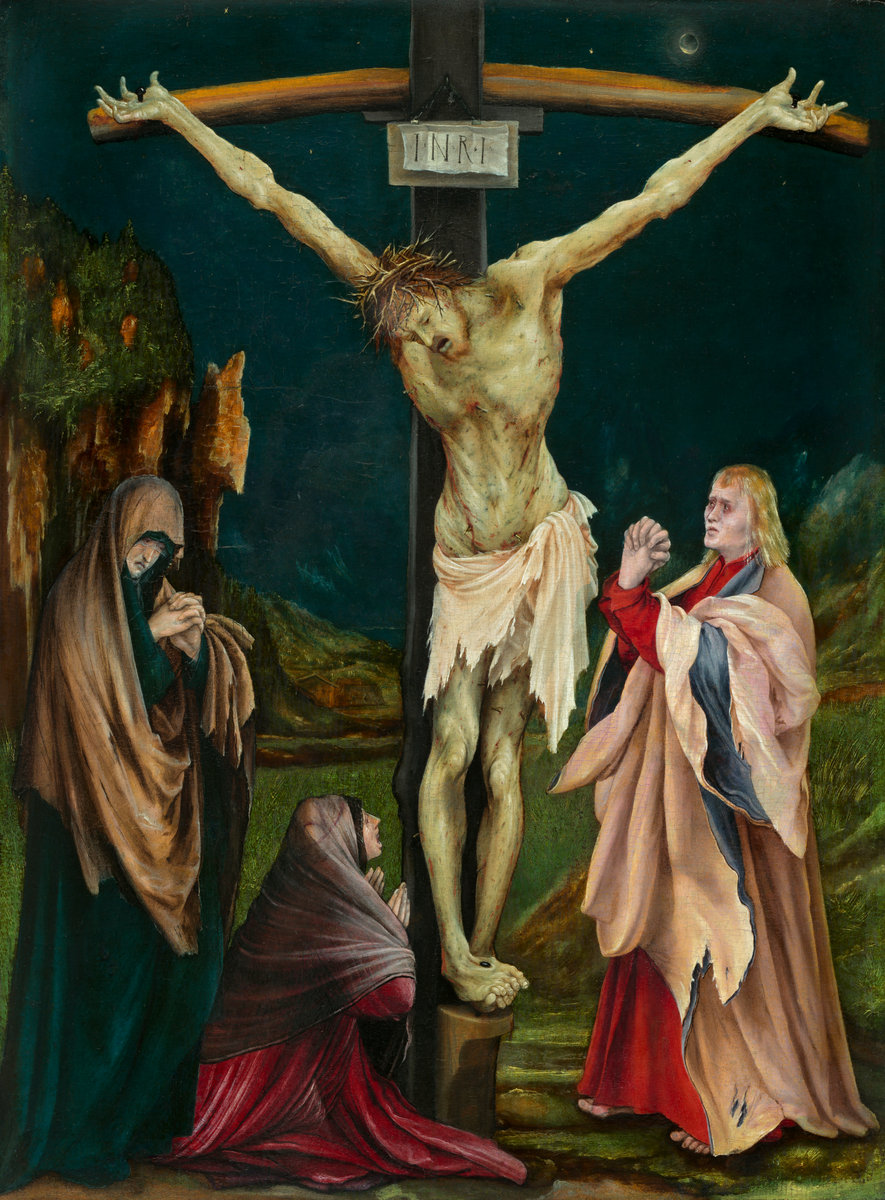 This is the revealed form of divine love.

Christ’s luminous body, draped in a tattered loincloth, gives evidence of the inhumanity of his tormentors, and the sin of humanity for which He willingly humbled himself, “becoming obedient to death, even death on a cross” (Philippians 2:8).

But it is our Lord’s yearning and twisted fingers and his gnarled feet that rivet the eye. For in them is expressed the fullness of divine love in anguish over human alienation from God. The crossbeam strains under the weight of his wounded body, while his distressed hands, stretching heavenward, offer final words of filial abandonment, “Into your hands I commend my spirit” (Luke 23: 46).

Three robed figures stand in the viewer’s space while uniquely sharing in Christ’s Passion. On the left stands Mary, his Mother, bowed with the grief that now pierces her heart; on the right is the beloved disciple, John the Evangelist, praying before the mystery of the Cross. And at the foot of the Cross kneels Mary Magdelene, pondering in a contemplative gaze the meaning of human suffering, in light of His Passion.

A landscape of low green hills and rocky inclines also bear witness to this pivotal moment in the history of salvation. It is as if all of creation groans with its suffering Lord. Grünewald conveys the biblical record of the “darkness that came over the whole land,” in the eerie green-blue light that envelops the scene.

The Gospel accounts of the Lord’s Passion, death, and Resurrection have, over the centuries, inspired countless master artists. Such works reveal the artists’ skill and creative inspiration. They also invite a profound sharing in the mystery of Christ’s dying and rising, made present for us in Lenten liturgies. Such artistic masterpieces are visual reminders that Good Friday and Easter Sunday are not distant theological abstractions, but events that forever transform human history, and our own daily existence, if we allow it.

To the casual observer, Grünewald’s The Small Crucifixion evokes empathy in the face of another’s torment. Through the eyes of faith the Christian disciple is led a step further. For in pondering this image we can be moved through beauty to enter into the redemptive meaning of Christ’s suffering. For through this visual homily, Grünewald, the painter, encourages us along the Lenten journey to persevere in our own daily patterns of dying and rising to new life.

Adjunct Professor in the Pontifical Faculty of the Immaculate Conception at the Dominican House of Studies, Washington, DC.